The Eddie Hurt Jr. Athletic Complex is home to OBU Football and OBU Track and Field. On Saturdays throughout the fall, more than 4,000 fans fill Crain Family Stadium to cheer on their beloved Bison.

New bleachers and a new video board were installed in 2013 power 5 lighting added in 2019 making the complex one of the best venues for small college football in Oklahoma. 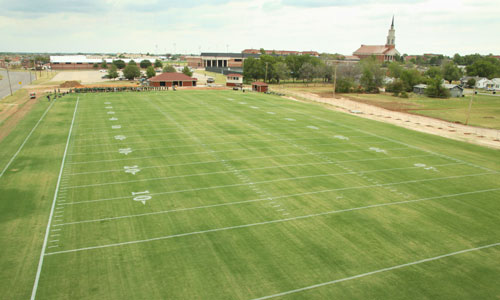 Located directly south of the Eddie Hurt Jr. Athletic Complex is the OBU Football practice field and locker room.  The complex provides OBU with designated areas for the football program as well as an all-sport weight room.

Built in 2012, the Larry Harris Weight Room facility, with state-of-the-art weight and conditioning equipment, is available for student-athlete development and training.

Also included in the building is the OBU football locker room that serves as the home for the Bison. Jensen comes off his most successful season to date as he led OBU to their best ever NCAA Division II record at 7-4 including a second straight 5-0 record over schools from Oklahoma.

Through seven seasons, Jensen has compiled a 30-47 record, having doubled his win total the past two seasons (12) prior to his first three seasons in NCAA Division II (6).

His 8-3 mark in 2014 landed the Bison in the No. 26 spot in the NAIA rankings and tied a school record for single-season wins. In 2017, the Bison finished No. 1 in the NCCAA power rankings.

Quarterback Preston Haire had a spectacular junior season in 2019 and was named GAC Offensive Player of the Year, the first major award to OBU from the GAC.

Haire, along with wide receiver Josh Cornell, were named to the D2CCA Super Region 3 Team.

Haire was in the Top 10 nationally in numerous categories all season long including completion percentage, total yards, passing yards, and passing touchdowns. Haire was named GAC Player of the Week three times this season and put up monster games throughout the 2019 season while setting numerous school records.

Jensen came to OBU from Southmoore High School, whose football program Jensen also began. He rebooted the Bison program in 2012 and had the first season in the fall of 2013.

Jensen started the Southmooore football program in 2008. In his and the program's second year, the SaberCats were 11-2 and reached the Class 6A semifinals. Jensen was named Oklahoma 6A-1 Coach of the Year in 2009.

Jensen was a varsity letterman at the University of Oklahoma, playing on the offensive line.

A self-described Army brat, Jensen graduated from Lawton High School and received a Naval Academy nomination. He achieved the level of Eagle Scout in Boy Scouts of America.

Chris and his wife, Patti, have three children, Tayler, Tanner and Camryn. They are members of Immanuel Baptist Church in Shawnee. Oklahoma Coaches Association Hall-of-Famer Greg Gothard came to OBU in 2014 as offensive line coach. He added the title of assistant head coach in 2016 and was promoted to offensive coordinator in 2019. Gothard is entering his eighth fall coaching the Bison.

In the 2019 season, as offensive coordinator, Gothard coached 2 players who were the first Bison to achieve All-Region selections. Quareterback Preston Haire and wide receiver Josh Cornell earned the D2CCA Super Region 3 Second Team. These awards contributed to the most successful Division II season.

In 2018, Gothard's Bison o-line led NCAA Division II in pass protection, allowing the fewest sacks (three) of any team in the country as OBU quarterbacks dropped back for over 500 attempts on the season.

Prior to coming to Bison Hill, Gothard spent 25 years at Velma-Alma High School, including 16 years as head coach and nine as defensive coordinator. Gothard's teams twice reached the state championship (2001 and 2006). He won over 73 percent of the time finishing with a career record of 143-51 with the Comets.

As an assistant, Gothard was part of back-to-back state Class A State Champion football teams in 1993 and 1994. During that stretch the Comets won a school-record 40 consecutive games.

Gothard, a native of Kingston, received his bachelor of science degree from Southeastern Oklahoma State in 1985 and a master’s of education degree from East Central in 2001.

Gothard and his wife, Leslie, have two children, Kirsten Martin and Cord Gothard. Kirsten and her husband Derek are the parents of coach Gothard’s only grandchild, Addie Mae Martin. The Gothards are members at Immanuel Baptist Church.

Taggart Brown was named quarterbacks coach at Oklahoma Baptist in March 2021 after serving at Oklahoma State in an offensive student assistant role since 2018.

During his time at OSU, the Cowboys had three bowl game appearances, including the Music City Bowl, Texas Bowl, and Cheez-It Bowl.

In 2019, Brown received his Bachelor of Science in Applied Exercise Science concentrating in Strength and Conditioning from OSU with a minor in Coaching Science.

A native of Enid, Oklahoma, Brown played football, baseball, and ran track at Chisholm High School. He was a captain for two years and helped the Longhorns make the playoffs for the first time in 11 years. Brown was a state all-star and district MVP.

He was promoted to strength and conditioning coordinator prior to the 2015 season and will continue coaching linebackers. Morris is entering his eighth year coaching the Bison defense.

in 2019, Morris led the Bison defense to one of the best games of the division II record. Against Southern Nazarene, the Bison ended their regular season on a high defensive note.

After playing nose guard at Westmoore High School, he played middle linebacker at the University of Oklahoma.

Morris is assistant youth pastor and assistant to the head pastor at Revival for Christ Club and is part of a live Christian Dinner Theater in Moore that helps raise funds for missions to the Philippines, as well as reaching families in need in the local community.

Abert Monge was hired in 2019 as assistant football coach for the Bison football team.

Prior to becoming a football coach, Monge played football and baseball for OBU and was a part of the first Division II Great American Conference Championship team for Bison Baseball in 2019.

Monge earned his Associate’s Degree in Communication Studies before transferring and earning a Bachelor’s Degree from OBU in Psychology, Pre-Counseling. He is currently studying in the Marriage and Family Therapy Graduate Program at OBU.

Monge was born in San Bernardino, California, where he spent the majority of his life, before coming to OBU. Jason Melot was hired in 2012 as assistant football coach for the first Bison football team since 1940. Melot is entering his 10th season working with the Bison.

Melot came to OBU from Southmoore High School where he worked as assistant head football coach under new OBU Head Coach Chris Jensen. In addition to coordinating special teams, he will work with inside linebackers and coordinate recruiting.

Melot earned his bachelor of science degree in biology education from East Central University in 1993 and was hired that fall at Wynnewood, where he coached football (defensive coordinator three years) and basketball.

The 2012 president of the Oklahoma Football Coaches Association, Melot worked as a head coach and defensive coordinator at Pauls Valley from 1999-2004 and became assistant football coach at Westmoore in 2004. In 2008, he joined the staff at Southmoore.

He has been Teacher of the Year at both Pauls Valley (2002) and Wynnewood (1998). He also has been a clinic speaker for the Oil Bowl (2000) and has coached on three district championship teams.

Melot is a graduate of Tecumseh High School and has a daughter, Madalynne. He married OBU alum Rachael Monroe in 2015. Daniel Eaton was named wide receivers coach at Oklahoma Baptist in July 2019 after serving as a graduate assistant coach at Black Hills State during the 2018 season.

Daniel was named Offensive Coordinator for the Bison going into the 2022 season.  He will continue to coach the receivers.

Prior to his tenure with the Yellowjackets, Eaton was the wide receivers coach and offensive coordinator and director of recruiting at Harker High School in San Jose, California.

A native of Los Altos, California, Eaton played Division I football at UCLA from 2012-16.

Cedric Leonard joined the Bison coaching staff as defensive line coach in 2019 after serving the previous two years as a graduate assistant at Midwestern State in Wichita Falls, Texas.

Prior to joining the Mustangs in 2017, Leonard was a student assistant coach at his alma mater, the University of North Alabama.

In four years as a college football coach, Leonard’s teams have combined for six conference championships at the Division I and Division II levels.

Leonard received his Bachelor of Science degree in sport and fitness administration from UNA in 2017, and expects to complete work on a master’s degree at Midwestern State in 2020.

A native of Montgomery, Alabama, Leonard played several positions at St. Jude High School while serving as a three-year captain. He earned honorable mention all-state and all-region honors for the Pirates and also lettered in track and field.

He began his college football playing career at defensive line for Troy University before transferring to North Alabama in 2013 where he played under legendary head coach Bobby Wallace. Zach Blevins joined the OBU coaching staff in 2020 as the tight ends coach. In November 2020 he   received his Bachelor of Arts in Sports Recreation and Sports Recreation Management from OBU.   He played offensive line for the Bison all four years, starting three of those years. In 2018, Blevins’s junior season, the Bison o-line led NCAA Division II in pass protection, allowing the fewest sacks (three) of any team in the country.  Zach is from Cibolo, Texas where he attended and graduated from Byron P. Steele High School. He earned academic and athletic honors including Academic All-State and All-District First Team Offensive Line. He helped the Knights to the Texas 6A State Semi-Finals his junior and senior years.

Coach Blevins is married to Allie who is also a 2020 graduate of Oklahoma Baptist. They have one child, their daughter Millie Rose Blevins.